It is official. Nancy is the “People’s Choice” Winner in the International Region of the Mountain Stage NewSong Contest. There are six regions (the other five throughout the U.S.), each with ten finalists. Nancy placed 4th overall in the popular vote. 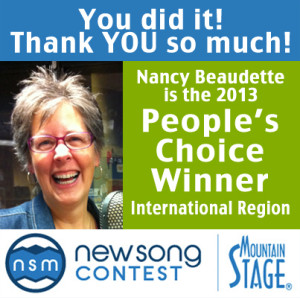 Victoria Vox received the most PC votes among all regional finalists this year. Here is a listing of Winners in all regions:

Congratulations to Victoria and all the Regional Winners! Thank you to everyone of Nancy’s friends and fans who voted and showed their support.