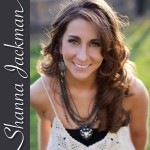 The first thing that struck me when I was listening to Central Massachusetts native and 2010 Cat Country 98.1 WCTK Country Idol Shanna Jackman’s eponymous debut EP was her affection for Martina McBride, a point driven home as much by her vocal delivery as the sonic direction of her music. I was transported back to the Martina era, and the guitar work from “This One’s For The Girls.”

Jackman, formally of the band Not In Kansas and 2011 New England Country Music Organization Most Promising Vocalist and Entertainer of the Year (she also won the NECMO Horizon Award this year), is a….read more: http://jonopappalardo.wordpress.com/2013/09/26/album-review-shanna-jackman-shanna-jackman-ep/