They and thousands of other traditional and contemporary folk performers, avant-garde singer-songwriters comedians and satirists fill a three hour entertainment that we call The Midnight Special. Nancy and her Holiday CD “Fa La La” are among Rich’s picks this week. “It’s an honour to be on Rich’s playlist – but to be one of his favourites is truly humbling,” says Nancy.

The Midnight Special is an syndicated radio program recognized as one of the premier broadcasts in the folk music world. It is broadcast on WFMT, 98.7 FM from Chicago.

Show host, Rich Warren grew up in Evanston, Illinois, fascinated by radio. He even operated a radio station from his bedroom with a toy transmitter connected to an illegally long antenna, and was ultimately reprimanded by the FCC. The programming? Classical, folk, and showtunes. His passion flourished into an esteemed career in broadcasting and print media. He is a freelance contributor to newpapers and magazines, and reviews folk music recordings for Sing Out!, the national folk song magazine. He is an active member of the North American Folk Alliance and has served on its board. 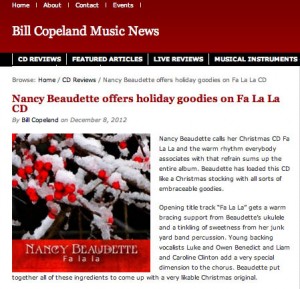 “Nancy Beaudette calls her Christmas CD Fa La La and the warm rhythm everybody associates with that refrain sums up the entire album. Beaudette has loaded this CD like a Christmas stocking with all sorts of embraceable goodies.”

“Solo acoustic number “In Our Home” has as much homey feeling as it does talent. Beaudette creates plenty of texture with just the two instruments. She caresses her vocal notes and presses her guitar notes into something that makes you feel what she felt during the holidays in her childhood home. Many listeners will likely relate to this one.”

“Beaudette offers a lot of holiday sentiment in this release Fa La La. She explores the holiday in all of its various implications, from the birth of a special child to a person who is alone for the holidays after a broken relationship. Beaudette’s voice, guitar, songwriting and her support players are all in top form here. This CD should make an excellent stocking stuffer but it is also a whole lot more.”

Bill Copeland is a music journalist with over 20 years experience writing about the music industry. Bill writes articles and reviews about bands, singers, songwriters, and soloists. BillCopelandMusicNews.com is a for-profit on-line music magazine. 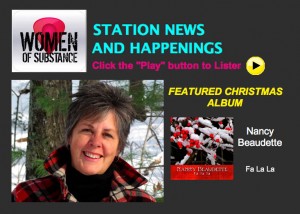 Women of Substance Radio is a streaming, online radio station which airs 24/7 on the Live365 Network and iTunes Radio. Women Of Substance Internet Radio features label artists and Indie artists in all genres side by side, and throughout the month of December, 2012, they will be featuring Nancy Beaudette’s new CD, “Fa La La”. Click here to listen and for your chance to WIN a copy of FA LA LA!