Open to writers of all levels of ability.

What are Workshop Attendees saying about this course?

“This is such a unique songwriting technique. I’m really surprised that no one else have ever taught this method. This workshop will definitely take my writing to the next level. Absolutely amazing.”

“This workshop was great fun. Nancy and Laura do a great job of presenting the material and making the workshop interactive.”

“This is an innovative, accessible approach to writing that I haven’t seen anywhere else. Brilliant. Brava to the authors.”

Join Nancy Beaudette and Laura Zucker for one hour each week for five consecutive weeks ONLINE on ZOOM.

Open to writers of all levels of ability. Register today.

This book is focused on the ‘craft’ of songwriting and the care and nurturing of your ‘creative being’. Intended for both novice and experienced songwriters, “SongC.R.A.F.T. – Writing In Your Authentic Voice” is an invitation to dig deep into your personal memories and experiences and write in your most vulnerable, courageous voice.

Award-winning songwriters and authors, Nancy Beaudette and Laura Zucker, will guide you through a series of exercises and reflections which will help you write a song lyric by the end of the book. Nancy and Laura have been using the “SongC.R.A.F.T.” method throughout their professional careers, and teach this process to writers across the country.

The Author’s have created a special website with additional video content and blog. Visit www.mysongcraft.com for more details. 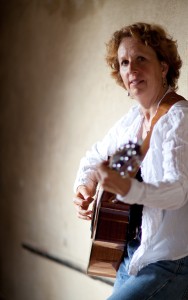 Moonlit Pond Records & Promotions is pleased to announce that Jim Photoglo will be making a pit stop in Lunenburg, MA during his North-East tour this fall. Mark these dates on your calendar: 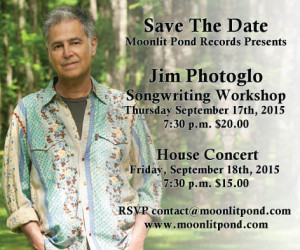 I’m so thrilled to be part of this extraordinary Songwriter Retreat in Georgia at the end of February. Louisa Branscomb is a powerhouse songwriter with Grammys and a multitude of other awards to her credit. I’ll be presenting on marketing & social media, offering private consultations on songwriting and marketing to attendees, and performing at a special House Concert on Saturday night along side Louisa and Johnny & Jeanette Williams.

Here’s a little more info on the event:

Jeanette, reigning (4 time winner) Traditional Female Vocalist of the Year (SPBGMA) is a multi-winning vocalist as well as member of IBMA Recorded Event winners Daughters of Bluegrass, and has won the prestigious Chris Austin Songwriting Contest in Bluegrass. Johnny, known as award winning guitarist, vocalist, and songwriter, is distinguished as one of the most revered early songwriters in bluegrass to contribute new, fresh songs that capture the integrity of the founding bluegrass sound. Johnny’s name is a household word in bluegrass, considered a master traditional singer, guitar player, and songwriter.

Louisa’s honors include over 140 songs recorded in bluegrass anda acoustic music, SPBGMA Song of the Year, 2 Grammy selections (Krauss, Denver), 2 IBMA Recorded Event of the Years, 2 nominations for the 2011 awards, longest running chart hit in bluegrass (“Steel Rails”), #36 bluegrass song 2011 (“I’ll Take Love”), and selection in the Atlanta Music Hall of Honor, three time nominee for Songwriter of the Year (SPBGMA), and member of the “Daughters of Bluegrass.”

Nancy Beaudette is an award winning singer-songwriter, originally from Canada, who makes her home in Boston, MA. Nancy was a Canadian finalist in 2009 and 2010 in the Mountain Stage New Song Competition, and a finalist in both The 2010 New England Song Contest and the 2010 Acoustic Roundtable Song Competition. Her co-write with Louisa, “My Silvertone Guitar,” was included on her Christmas CD which garnered her a place in the top 50 folk roots music releases in December, 2012.